Why I hate the Asian Heritage Street Celebration and Fair 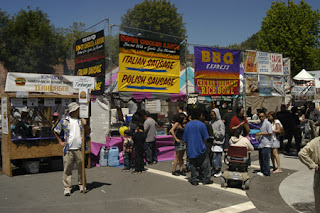 But things did not go so well that first year, see me in the picture? I'm the guy holding the sign, with my right hand on my hip, pretty pissed off of what I'm seeing.

Being a volunteer for the "Teriburger" booth for over 10 years now, I was quite upset about this event, first that it was largely corporate controlled and not really community organized like the Cherry Blossom Festival and the Nihonmachi Street Fair. Second, there was no organization of vehicle traffic during the morning booth set-up, and there was a huge line of cars trying to get out of the fenced-off area to find a space so that they can work their booth. Lastly, our burger booth did very poorly during that day.

That last point I mentioned was the worst part of the event. Our staff decided to close early because we just could not sell the product. During the two main festivals in April and August here in SF's Japantown, we sell these things like hot cakes, so irresistible that people would wait in line for 20 minutes to have one. During this day, we sold squat, and a big problem was the other food booths.

The concept of the Cherry Blossom Festival and the Nihonmachi Street Fair is that every food booth was operated by a non-profit community organization, and each organization had a monopoly on one or two food items and/or certain beverages.

The Asian Heritage Street Fair DID NOT. Who in their DAMN mind thought that out of the 10 or so booths, FOUR sold kabobs, THREE sold lemonade, and TWO sold hot dogs??

PLUS, ALL OF THE BOOTHS (except for us) WERE FOR PROFIT! Look at that photo again, we don't have a big booth, and they do.

For the folks at Asianweek, you may have called it a success, I call it a FUCKING FAILURE.

And lets realize this, it's 2007, they are doing it somewhere else, are you really sure that's a good idea? Last year, it was at Irving Street, where parking is IMPOSSIBLE ON WEEKENDS and there is NO EASY ACCESS TO PUBLIC TRANSIT! Why not just bring it back to Japantown, where we have a two story underground lot with a major bus line just next door?

One last comment, during the festival, I had two ladies nearby the booth offer me five bucks to "shut the fuck up" for my famous burger barking techniques . I told them to fuck off.

(True fact, my barking techniques actually increased business for us during the Cherry Blossom and Nihonmachi Street Fair. I started doing that about 7 years ago, and others are catching on too.)

Let's summarize my rants:
For you Asian Heritage Street Fair/Celebration folks, take my suggestions seriously.
Don't let food booths be operated by for-profit people, let non-profit community organizations do it.
Let each food booth monopolize on one or two items, in order for maximum profits for each org.
Bring it back to Japantown, home of plenty of parking and public transit. Just don't piss-off the neighborhood locals again.
Posted by Akit