Another reason why I don't ride Muni 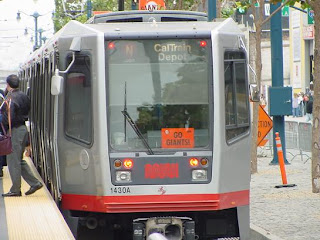 For the past few days, local San Francisco news media outlets, including the Chronicle has been reporting about the new "T" Third Line, which replaces the classic "15" Third Street bus line that has been operating on San Francisco streets for many decades.

This new project has cost taxpayers millions of dollars, and a five year construction project in order to promote gentrification in the low-income areas, such as Visitacion Valley. Gentrification has already started a phenomenon in the Mission Bay district with the extension from the Embarcadero MUNI station to all the way to the Caltrain terminal at 4th street. Much of the credit also goes to the Pac Bell Park/SBC/AT&T Park that opened in 2001, and in six years, has skyrocketed the price of land and new condos and businesses have established themselves to cater to the baseball fans and people looking for a quick metro ride to downtown for work.

But back to the new "T" line's woes. The Chronicle reports that the new "T" line is still having some operating problems since opening for public use on Saturday, and passengers are complaining of delays ranging from 30 minutes to one hour. Typical train frequency is supposed to be 8 minutes, but frequent train breakdowns, electricity problems, and clogging in the Market Street tunnel is making passengers upset.

Does anyone remember Muni's classic "meltdown" when the metro was so clogged that people hated Muni for at least a year? I was stuck in a tunnel for 15 minutes with no air conditioning. The reason, they were running their new automated train control system, and it was not working well with the old trains, and other trains had to run manually, causing headaches with the system.

"T" means trouble, says the Chronicle. It makes people wonder, is it really worth getting in your car and paying expensive gas and parking fees for being inconvenienced by Muni? I say yes because I got fed-up with Muni a year ago, and now I drive everywhere I need to be. It's definitely faster, and while I pay about $25 every few weeks to fill the tank, I say it is really worth it.

Let's summarize my rants:
Muni's "T" line needs some work
Bring back the 15 line until the "T" is working
Just another Muni meltdown?
Just drive
Posted by Akit