Still proud of Save Japantown movement 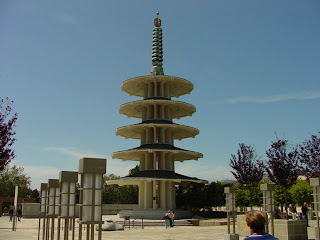 I created the "Save Japantown" movement in concern to the sale of San Francisco's Japantown properties just over one year ago. To this day, I am proud of my accomplishments and to make a community come together and be proud of the Japanese American culture and heritage.

During my final graduating semester in college, I learned about the sale of Japantown's properties in the newspaper. All I thought about that day is about what can I do to stop this, and I knew it, an online petition.

With just $10 for a website registration at savejapantown.com and a free petition hosting website, I was ready to go. As the creator, I was the honoree of the first signature, and I spread the word by e-mail to all my professors and fellow friends to have them sign it too. Word spread so quickly, that in the first couple of days, I already received 2,000 signatures.

One week: 5,500, two days after: 7,000. Within a month, I submitted my petition to Mayor Gavin Newsom with 16,235 signatures. I knew by then, I accomplished something that I thought would be impossible, but with the good help of friends and e-mail, I was able to make sure that there was plenty of backup support to fight for our small community.

I also remember on a cold foggy day, I was on the Geary Street bridge that goes on the other side of Webster St. and I was with two other people and holding a banner over the bridge, promoting the Save Japantown rally. Many vehicles that passed by honked their horns in support, and we waived at them, thanking them for their help.

Recently, I was given an award from the National Japanese American Historical Society (NJAHS) in recognition of my efforts to "Save Japantown." I have been given verbal recognition in many places, including random people coming to me and thanking me for the good work, but a physical award made it even sweeter.

Out of the hard work and effort, I also learned that there were some negative sides to it. I've made a lot of new friends, but also made enemies.

Dale Minami and Don Tamaki were two people I feel despised our community because they basically sold us out. Their firm was the ones that were hired by the Kintetsu corporation to find a new person to buy the properties. Assuming that they were paid well for their services, but as well as needing to tailor the sale to make sure that the community is preserved, was difficult, but I think that a lot of community members, as myself, feel betrayed by them. At the "last meeting" where the Special Use District proposals and covenants were presented to the community, I questioned Don Tamaki about the covenant agreement. I asked him about what will happen after the covenant expires, and what guarantees that Japantown will still exist. He tried to go around the question with a bullshit answer, and I rudely interrupted him to stop his blabbering. He then tried to speak over my interruption and I yelled loud, in front of 50+ people in the crowd and I demanded a real answer.

Another is the Japantown Merchants Association. Also during the "last meeting," they publicly disagreed with the Special Use District, and that came to be a major shocker to the people in the room. After Jeff Adachi gave his comments, I gave mine with a vengeance. I felt real upset because the Merchant's Association turned their backs on the community, and it felt like my efforts to "Save Japantown" was ruined. I went on a large rant, spewing everything I could at them, from their definition of "community leaders" who also supported the association's views of not accepting the Special Use District, and nearly calling out a boycott of all merchants that are part of the association.

Just to make things worse, when I passed out "Save Japantown" fliers to various merchants, nearly all of them did not post it. One of them basically told me to fuck off. I know who you are, and I don't patronize you anymore.

Sure as hell, I brought shame to both the lawyers and the Merchant's Association and some friends, but I stand on my harsh reactions towards them. And to this day, I still have personal issues with these two groups. For nearly three months, I did not even visit Japantown until I felt that the heat died down.

I sent an e-mail out a few days after to various community leaders about my harsh reaction during that meeting. Here it is below (edited for length):
----
Hello Everyone,
As we all know, there's a big problem that we all are facing right now with this special use district... ...I'd like to see this conflict end because if this bitter battle goes any further, then the degree of separation may as well destroy the fundamentals of our community...

Lastly, I understand that some of the members of the community and the merchants association believes that my comments towards the merchants as well as towards Don Tamaki during the community meeting on May 4th, were at times outrageous. I do apologize for my actions, however some other community members that I keep in touch with, feel so upset that they are embarrassed to speak in public about it; and regardless if I make a fool out of myself, I need to also represent that minority too.

I want to do what is right for Japantown. I push hard because because we must never give-up the fight. People thought some of the JA's were crazy to demand redress and an apology, but after years of fighting an uphill battle, we got our government to acknowledge of what they did was wrong.

I idolize people like SFSU Professor Dan Begonia for telling me to fight for what is right and correcting the wrongs. He told the class one day about the story of Vicky Menalo Draves, a Pilipino American Olympic diver. He said that after fighting racism and discrimination, and earning two gold medals in the Olympics, she never earned the recognition of the Bay Area Sports Hall of Fame. That motivated some of my best friends to organize and fight for what she so rightfully deserves. Mayor Newsom now supports this cause, and the city renamed a park in her honor. But the battle is not over.

I would have never rose-up to start a very successful petition drive without people like Dan to support me, and that has kick-started so many positive things from a rally, the cooperation of community leaders, organization of the youth, and possibly the deal that was made between Kintetsu, 3D, and the City. I hope that more positive things come out at the end of the tunnel for our community.
----

In the end, the Merchant's Association changed their mind and told the city government that they support the Special Use District, but I still feel that they brought shame to the community by first opposing it in the first place.

Today, I am still proud of our Japanese American community. The Cherry Blossom Festival is back and with brisk business everywhere. It makes me curious to know just how many people in the crowd even knows what the Save Japantown movement was all about.

If I get a chance to use a microphone in front of a large crowd during the Cherry Blossom Festival, I would say that "Without your help, the Save Japantown movement and petition drive would not have been successful. Your efforts has helped to preserve our community and the members of this community will never forget about all the supporters that came to defend us at our weakest. For that, I thank you."

Is Japantown saved? I think so, but just for how long?
Posted by Akit