Too many Vegas Casino Players Cards 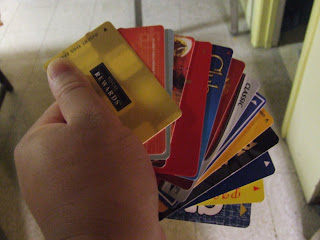 I think I've gone nuts on the casino membership cards.

Grand total: 15 cards (although trying to fan out the cards for the camera only exposed 14 of them).

Now, can I get my free hotel room?
Posted by Akit No comments:

A Wild 4 Days in Vegas 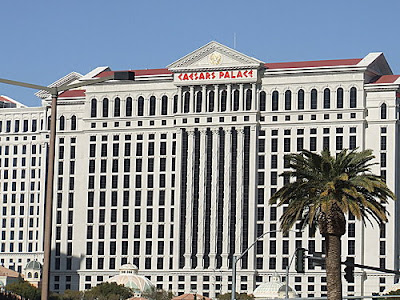 So, I fly in on Father's day with a comped hotel room at Bally's as long as my father played in the slot tournament. Basically, I only paid the airfare of about $188, but it would be cheaper if I flew on a Monday, but oh well.

So on the first night we arrive, I had to treat my dad to a good meal, so we go to our favorite BBQ restaurant in town at the Ellis Island Brewery and Casino, just behind Bally's. For just under $10, you get a whole rack of ribs coated with BBQ sauce with all the fixins'. A full rack of tender ribs for dinner is yummy! Plus, their home made root beer is one of the best in town.

I also paid for a Las Vegas Monorail day pass that is on sale for the entire summer for $8 and I stopped at multiple casinos to join their club programs that track your play. So by the end of my vacation, I got seven new cards, to add to my existing eight for a grand total of 15 cards. Oomph, it started getting heavy.

Although I got my butt whipped in gambling I did have some fun adventures:
$15 in free play money at Sahara. I fried it immediately and took back $46.00
$10 in free play money at Wynn. Used it and took back $5 (thanks Steve Wynn for money for a few hot dogs)
Sweating to death in the heat.
Suffering with an air conditioner in my hotel room that would not go below 70 degrees.
Some random joe and his wife giving my dad and I free monorail passes for the rest of the day.
Eating the best ribs in town.
Had to get away from those guys trying to sell you a "good time."

Oh well, I guess I'll save up again and go back some other day. But maybe not in the summer again.
Posted by Akit No comments:

San Francisco District 4 (Sunset) supervisor Ed Jew is in the "dog house" and has been hiding there ever since an arrest warrant was issued.

So the dumbass surrenders to the police to get booked and released on bond, but why do it in BURLINGAME?

Shouldn't the guy surrender at a SF police station?

Fact: His wife and children live in Burlingame, and he has a "home" in the Sunset District in San Francisco.

By getting booked in Burlingame, that already assumes guilt that he still lives in Burlingame, shit, why not just give up and TELL THE TRUTH? The guy is SCARRED FOR LIFE regardless if he's able to clear his name.

I think the news media should do this: An unmarked car should stakeout where he is hiding and follow him around town to see if he goes to the Sunset home or returns back to his Burlingame home. If they can do it for common criminals, like that lady who abuses her carpool privileges by driving alone to SF and getting premium parking for only carpoolers.

By quietly following Ed Jew, it would be enough proof to show if he's fucking lying or telling the truth.

Let's summarize my rants:
Ed Jew, resign and let the embarrassment go away
Tell the facts
We are watching you, like Big Brother on meth
Posted by Akit No comments:

Here's an amusing thing you can do to get that annoying "a-hole" Rob Black off KRON4 (KRON Channel 4) off of television.

When his telephone number shows-up on the screen during his 4PM broadcast (which is SUPPOSED TO BE THE NEWS, NOT FINANCIAL CRAP!), just call it, and try to pass the screener that you want to ask about something like investments or trying to pay off that loan quicker.

Then, when he does answer LIVE on the air, act like you are intelligent to ask the question, and then yell out something like "ROB BLACK, YOU SUCK!" "KRON 4 SUCKS WITHOUT NBC, AND YOU TOO!" or how about "MY NETWORK-TV SUCKS, SO DO YOU BLACK!"

Why do I hate KRON 4 and Rob Black? Read here.

Rob Black is this annoying jackass on KRON that ruined the reputation of the 4PM news, which is supposed to be all news, not financial bla bla bla crap for 20 minutes.

Let me summarize my rants:
I do not encourage anyone to crank call, it's just for entertainment purposes only... (cough...)
Rob Black still sucks
KRON sucks even more, who wants to watch people beat-up each other and see lousy dramas?
Posted by Akit 1 comment:

Translink Card Bay Area - How I would fix it 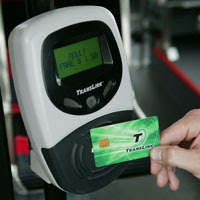 Ever since the Metropolitan Transportation Commission started their "Translink" program, I was there to help out their pilot program to test-out the program to assure that there will be no major problems to get it running in the future.

For about two or so years, I was primarily a pilot tester for San Francisco's Muni by using the product on their metro trains, but I was also issued a monthly sticker pass that I had to attach to my card to also use on other Muni transit vehicles.

One of the big advantages of the card is that I could load cash onto the card and use it on a limited number of transit agencies in the Bay Area, and I primarily stuck with BART, Golden Gate Ferry, and of course, Muni. I actually took transit more often just to try the card and visit some fun places like neighborhoods outside of SF and Great America.

Yet, out of all that "fun" of experimenting with the card, I hit several snags that made the experience interesting, but also rough on the edges. It was amusing that I contacted the Translink customer service center so many times that the people I talked to knew who I was.

The real problem with the Translink program stems from their poor implementation of the system, especially when it comes to installing the product on every single transit vehicle and station. When I was a tester for the program, the card worked very well on card readers that were permanently installed on train platforms/stations, and even the Golden Gate Ferry terminals. The permanently installed card readers were always on and 100% reliable, and that meant that I had a confident ride on-board public transit. The best experience is by taking the Golden Gate Ferry where all riders, regardless of being a daily user or infrequent user, would get the discount rate that was sometimes nearly 50% off the price of a ride across the bay. Muni Metro stations were not that bad, but because some stations only have one agent at one of the two booths, you sometimes had to tag the card and enter through the emergency gate. Caltrain was not so bad either, but the train conductors were not prepared to read the card, and had to fetch the card reader, which some had a little bit of a challenge to operate.

My solution: Install the program on permanent platforms first. Get it started on Caltrain first, because it will be the easiest to gain confidence with the public. Then, continue with installing it on BART, because the technology is already on the new faregates to read it. Lastly, get the product on the bus vehicles.

But let's talk about the bus vehicles. I've encountered a number of issues, including card readers that were marked "out of service" and not even turned-on. VTA buses were a real problem because it was supposedly installed on certain routes, but the readers were always broken. When they were installed on a majority of SF Muni metro trains, they worked when they were on; but when it was not powered-on, I practically had to teach the driver to turn-on the machine (just press the red button, and no it does not turn on the fire alarm... ok?). The problem with the card readers is that it has a slow startup time, and if you live at a bus terminal where they turn off their engines to not annoy the neighbors, you'd think that Translink sucks because the machine only operates when the engine runs. Plus, with the slow start-up time, would you just pay in cash or just say, I'll wait until the bus driver erupts in rage that he/she can't drive-off because you are still in front of the yellow line?

My solution: Why not put back-up batteries in each card reader, and when the bus is off, the batteries kick in, and when the bus is operating, it charges them. We have those electronic parking meters in San Francisco that runs on batteries (with no recharging capabilities), and they last quite a long time. Even better, upgrade the software for a quick start-up in less than 15 seconds. In just 30 seconds, the bus driver at the terminal is ready to leave after warming-up the engine.

Lastly, I've asked Translink on a number of occasions throughout the years about what's the progress, and they keep saying that it will be ready soon, and then later, and then years later. What's the delay? Can't they just cut the red tape and simply install it? If the price of the project keeps rising, wouldn't it be cheaper on the taxpayers if they just hurry and get it up and running?

I think the news said that the project originally cost about $38 million, but after all these years, it went through the roof to $150 million. If a contractor can rebuild a collapsed section of a highway ramp for a $5 million dollar bonus in less than a few weeks, would it be also worth it to just hire a contractor, train them, and give the company a nice bonus of lets say, $10 million to complete the project by a short deadline? If the project kept slacking-off and completion of the project would be in another two years, more than likely the cost of the project may hit $200 million; so if we are stuck at $150 million today, a $10 million bonus for a contractor to finish in lets say three to six months would be totally worth it.
Posted by Akit 5 comments: