Giants vs. Dodgers with Larry King and Lou Seal

I'm probably the luckiest man right now, I was able to get tickets on a Friday morning at 1AM for near front row tickets at the Giants game. Sure, it was $110 for just myself, but the experience and the great photographs was well worth it. The ticket said row "A" but it was not the super luxury tickets that get you right next to the field behind home plate, my seat was one section left of home plate in the front row, behind the luxury "field club" pit. 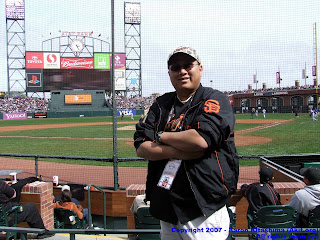 But it was so close to the action that I was able to get some great action photographs, but I won't post them here because of the large file size.

Also, I could not believe that Larry King was in the park too! Ya know, that talk show host on CNN was sitting in a nearby section, and he was purchasing some cotton candy and chatting with the vendor. I was able to get this great shot of him. I was joking with my fellow fans next to me and that I would give the photo to the Enquirer. 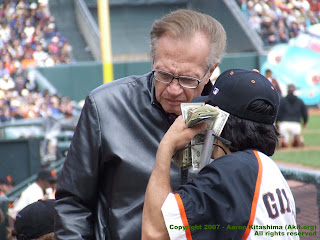 Lastly, here's one of Lou Seal: 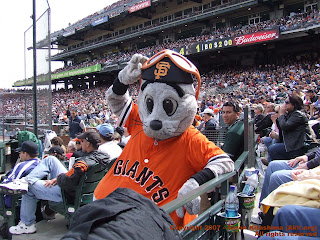 Let's summarize my rants:
Other than the ticket being quite expensive, nothing else to complain about!
Posted by Akit