On my block, parking on the street is not too challenging, but I hate it when my neighbors pull this crap (see photo above).

You S.O.B. parking space hog! If this car parked correctly by moving his/her vehicle up to the end of the curb about six to ten feet ahead of it, then someone else can fit their car behind there. Or... back-up your car about four feet in front of the white Mini Cooper so that someone can park their car in front of you. The Cooper has plenty of room to get out because of the driveway of the blue house.

JUST BECAUSE OF THIS, I HAD TO PARK MY CAR FAR AWAY. BASTARD.
Posted by Akit 1 comment: Here's another example of a parking space hog. San Francisco Japantown parking lot at about 1:00PM on January 19, 2008.

If you know who this is, please send my regards by "keying" the car. Sure can use a paintjob.
Posted by Akit 4 comments: 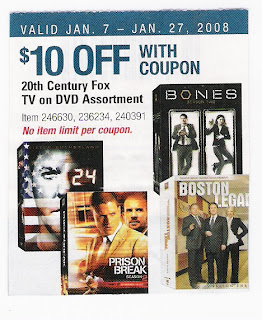 Anyone got an opinion about the interpretation of the coupon? Just post a comment!
Posted by Akit 5 comments: If you are the owner of the license plate 4LLM210, where the f--- did you learn to drive?

Caught driver swerving between two lanes to get in front of vehicles and didn't use turn signals.

Someone doesn't need to slap you, but needs to spank you with a paddle.
Posted by Akit No comments:

KRON channel 4 in San Francisco is being put up to sale! I knew it! The station has always sucked since they lost their NBC affiliation.

I always knew that these factors caused their death:
So, when is the funeral? Call the morgue! It's time to pop that cork of champagne and celebrate folks! The corrupt jackass surrenders!

If you resign, he's gotta be f-ing guilty of one of two things: taking a bribe, or not living in San Francisco.

I believe that he does not live in San Francisco, because his other home is in Burlingame. And when you get a warrant for your arrest, why the hell do you go to Burlingame to get booked by the cops?

For the entire news article, click here.
Posted by Akit No comments:

I'm wondering if anyone else is experiencing this problem:

I checked my e-mail and noticed that my rebate has been processed, but it says $5. I also called the rebate center, and they claim it is a "misprint." I don't believe so, because if your official store receipt says $7, I expect $7.

Is anyone else experiencing this problem?
Posted by Akit No comments:

Does anyone notice that these so called "Gladiators" (including the women) might be on steroids? The challengers aint buff, but those Gladiators look like our current list of professional wrestlers, known to take steroids. The co-host, Ali is a boxer, and she aint buff because you can't box legally on steroids.

Um... it should be noted that there's already been two injuries on this program, including the first women's event. What great editing NBC.
Posted by Akit 6 comments:

My Opinion on the San Francisco Zoo Tragedy

The San Francisco Zoo has had some bad incidents in the past years, from an elephant dying, to a lady being mauled by a tiger. Even more tragic is that one man was killed, and two were mauled (and survived) by the same tiger that attacked a keeper. AND THIS WAS ON CHRISTMAS DAY!

Now, this story has hit the national headlines big time, and this story is not going away that easy... OK, maybe in a month, just like the Cosco Busan oil spill incident. Our local news outlets don't even talk about the oil spill anymore.

There's this huge blame game going around, and it always seems that when things get really f-ed up, you always call the best "spin" public speakers and lawyers in the nation to screw around with the story. Lets see what they have to say:

The Zoo: They claim that the tiger was taunted by the three (now possibly four) people that were allegedly involved. They also claim that they had a quick enough response.

The lawyer for the mauled men: They did not taunt the tiger and zoo employees at the nearby cafe refused to let the men hide in the facility.

My analysis: The zoo is responsible for this incident. Regardless if an animal is taunted or not, it is the responsibility of the San Francisco Zoo to build safe exhibits that prevent animal escapes in the first place. For the tiger grotto, the wall was NOT HIGH ENOUGH to repel the animal.

So what's going to happen now?
-- I think that the zoo better be ready to take on a million dollar settlement. The zoo is held responsible for holding a DANGEROUS animal that is their responsibility. They built a grotto that is not high enough, and did not provide quick enough response to evacuate the area and respond to the incident. And now... they are to install a PA system... yeah, could have been installed decades ago; idiots.

I'd fire the entire zoo management for this fuck-up. Especially the guy who's getting paid over $100,000+ a year to "manage" this bullshit facility. Even better, close down the damn place if they cannot pay to maintain the facility. Why waste my tax dollars on a place that is inadequate in the name of safety?

What's wrong with this city?