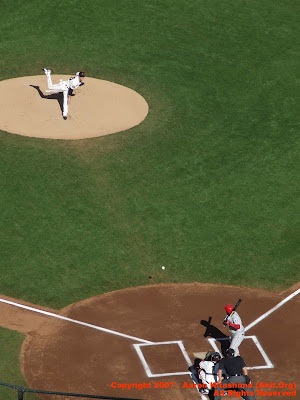 I was at the Giants game on Sunday, May 6, 2007 and I was able to capture Tim Lincecum's first ever pitch in the Major Leagues.

The only thing about Tim... two run homer by the Phillies in the first inning, and some more awful runs. Oh well.

Plus, being that Sunday was so dang warm in San Francisco, by the end of the game, I drank a 42 ounce "hugo" at McDonald's, a small designated driver soda, and two huge lemonades at the park.

I need to look for a white jersey to wear, black just soaks the sun.
Posted by Akit