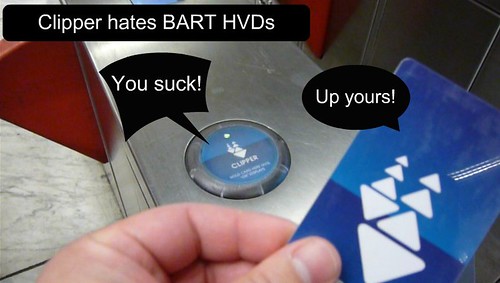 I got a little clue that the MTC wants to move to the next generation of Clipper card when I read a tweet from the folks from VTA.  I decided to dig around the meeting agenda documents available online to the public from the MTC website.

So it's actually true, the contact for Cubic, parent operator of the Clipper Card program, is going to expire in November 2019, that's roughly five years and seven months away.  At this time, committees of the MTC are in regular discussions about the next generation of fare payment technology for the Bay Area, and while there's no definite answer, there's some hints on what is going to happen after late 2019:

The setup currently used for the Clipper Card/TransLink system is from the late 90s and within the next five years, the equipment will be reaching the end of its life.  The equipment being used right now originally came from ERG, an Australian company originally contracted to do the TransLink/Clipper system; but Cubic purchased ERG and since the network was already established, Cubic had to work with old equipment that's not their own to make it work (it's like trying to hammer a square peg into a round hole, it won't fit unless you shave the edges down to make it fit).

The MTC admits that trying to integrate the next generation system into the existing infrastructure would be too expensive and risky.  This would mean the next generation fare system may have to start from absolute scratch; this is one of the reasons why they are planning so far in advance for this.

The MTC also mentioned during their planning timeline to learn the lessons from the past to make sure it's a much smoother process.  I remember being part of the TransLink pilot program with very few transit agencies participating and limited usage, and it took many years to finally get all major transit agencies to join and be fully integrated.

Lastly, this second generation of fare payment may also bring in new technologies to improve the customer experience.  We all know about the headaches and limitations of Clipper, including the 3-5 day wait when buying online.  New technologies may allow us to pay for rides with a smartphone or even with credit cards with RFID chips installed.

To read the full MTC documents about the planned project, visit: http://apps.mtc.ca.gov/meeting_packet_documents/agenda_2196/Agenda_Item_3.pdf and start on page 14.
Posted by Akit