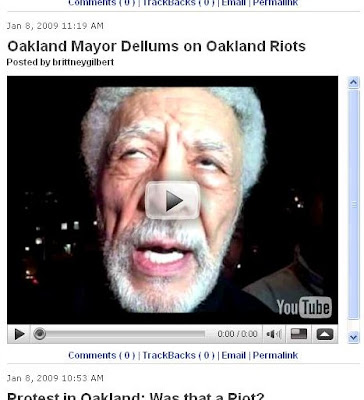 This came from KPIX/CBS 5's "Eye on Blogs" where editor Brittney Gilbert made a posting showing a YouTube video of Mayor Ron Dellums talking to citizens about the riot in Oakland due to the police involved shooting and death of a passenger at the Fruitvale BART platform.

Whoever made this YouTube video chose the perfect screenshot of Dellums. Doesn't he look kinda high or drunk? Makes me want to use this on some of my username photos.

I don't usually blog about other Bay Area cities, but this is one exception since Dellums looks totally funny. And if you don't know who Ron Dellums is, join the club. It seems many people don't like the guy, and people on the SFgate comment boards likes to make fun of him.
Posted by Akit