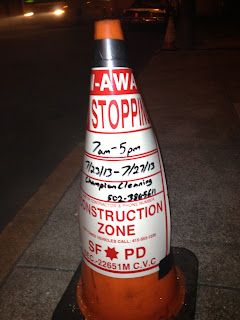 Since I had to quickly write the blog entry about the illegally posted tow-away signs in front of my house, I decided to spend this evening doing some further research about this matter.

My late grandmother taught me to raise hell and advocate for what I believe in.  She sure did that by demanding redress for all Japanese Americans forced into the Japanese internment camps during World War II, and after many years of working hard and being a leader, all survivors received a $20,000 check and an apology from the President of the United States.  Now it's my time to raise hell against Champion Cleaning, the people who thinks it's totally okay to put tow-away signs and blatantly violate several laws in the process.

Here's what I did after filing a complaint with the city:

I gave a call to SF 311 for an update about my complaint and was told the message was passed-on to the Department of Public Works' street use department, but didn't receive a response back.  The next time I can get in contact would be as early as 8AM on Friday.

I decided to call the SFPD Taraval Station and spoke with a desk sergeant.  I explained the situation and he told me to get in touch with DPT (SFMTA Parking) about the matter.  I asked if I had the right to file a police report for a company violating traffic code 33.1, and he said I can't.  I also asked him if the station had a copy of any paperwork regarding any temporary tow away zones in their jurisdiction and he said they don't have materials about that; unlike what the officer at the SFPD Richmond station told me.

Seeing no purpose of trying to call in circles, it was time to look around the city law books online.

1. Signs shall be posted only within the limits of construction.
2. Signs shall be posted every 20 linear feet of occupied space with at least one sign at each end of the occupied space.
3. Place signs on wood or aluminum backing or approved equal.
4. Mount the signs securely to existing poles, posts, on Type II barricades per Caltrans specifications, or on construction fences.
5. The Contractor shall maintain the signs on a continuous basis and shall replace damaged or missing signs daily.
6. Contractor shall remove the signs and mounting materials immediately after construction has been completed.

And the rest?  #3 #4 is in violation because while they did post the signs on A-frames, they broke the law by posting some of them on traffic cones.  #6 can't be determined until the project is done.


"Building Construction, Maintenance or Repair. Any temporary Parking restriction or prohibition related to building construction, maintenance, or repair in the public right-of-way shall be posted in compliance with Article 15, Section 724.3 of the Public Works Code."

Let's go to Article 15, Section 724.3 of the Public Works Code.
Subsection (a) basically states 72 hours advance notice must be provided when placing the construction signs.  It also mentions:

Subsection (b) basically states the proper posting of signage, such as on a-frames and poles.

Let's do a little analysis about the posted laws I'm referring to on the "second stop." Champion Cleaning who posted the signs have broken numerous codes under the Transportation and Public Works Codes:
--------------------


Last stop: SFMTA's "Blue Book."
Since so many of these construction zone parking laws cross between Public Works, Transportation Codes, and many others, the SFMTA published a "Blue Book" as an easier way for people to understand all laws and regulations.  It basically sums up everything I've mentioned above.  If you would like to read it, click here and review section 4.

My last words:
I've done my research, which means I have the ammo (the laws) to unleash hell.  If the city officials don't want to do their job to enforce and place a $1,000 fine against Champion Cleaning (a subcontractor of PG&E), I'll start making the round of phone calls, starting with the supervisor of my district.

If ANY CAR in my neighborhood gets either a ticket or towed in the next few days, I will fight back hard because you bastards NEVER gave minimum 72 hour notice.
Posted by Akit