If you've been to a Giants game, you know that the donut shop across the street sells these jackets for dirt cheap (see left). I found this one at the "Only in San Francisco" store at Pier 39, and their selling price is 19.99.

And you wonder... just what kind of quality is this stuff?

I can tell you a few things about this jacket. Obviously, this is not SF Giants or MLB approved merchandise.
If you wear this jacket to a Giants game, you are a disgrace to to not just the team, but the fans who purchase the real stuff.

Below is the REAL Giants jacket made by Majestic. The newest jacket is a modified material that is actually lighter, but warmer. While the Giants Dugout sells them for nearly $130.00, you can go to Amazon and purchase it direct from the manufacturer for only $109.99 and you get free shipping too. To view item, click here. 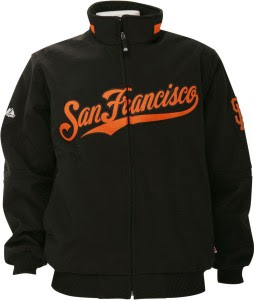 Lastly, thanks to Phil Bronstein and his staff (including Eve) at the San Francisco Chronicle for contacting San Francisco Muni to find an answer on my previous blog posting about Muni not accepting transfer coupons for the return trip from AT&T park. Lets see if Muni and Giants management will accept it at the Giants' next homestand starting July 18, 2008 with Crazy Crab day (rehab the crab!).

It is unbelieveable that a little blog by one person can change official policy on a public agency.
Posted by Akit