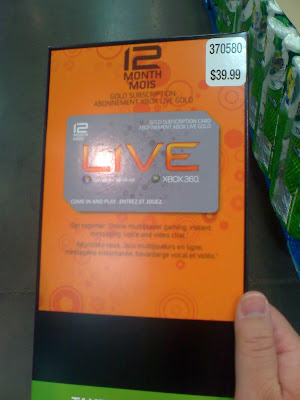 In this economy, every dollar counts. Some like to call it "stretching the dollar" but in reality, if you literally stretched that dollar, you'd tear it and the bank will shake their head and ask why did you rip that bill.

What can you really find these days that are a huge savings? Let's take a look at two places you can go to save some dough, and one place that you should just avoid.

Costco: As pictured, my Xbox 360 Live "Gold" membership was about to expire and I didn't notice until I walked around that they were selling the 12 month renewal cards for $10 less than at normal retail at other places like Best Buy. The renewal card at Costco is $39.99, while other places sell them for $49.99.

Costco.com used to be the only place that would sell the discounted renewal cards; now they are available at the warehouses!!! Right now, Costco.com is selling the renewal cards for the same price, the only catch is you still have to pay for shipping.

Interesting fact: Typically if you buy video games, the prices stay the same wherever you go, but Costco can shave at least $5 off the bill. Even the video game console packages sold at Costco is like getting an extra controller and a couple of games for free.

San Francisco Giants Tickets: Sports games tickets are so damn expensive... I've heard that plenty of times. It's so easy these days to buy them online or at your nearest ticket outlet retailer, but when you see how much you paid for that ticket, the surcharges makes you want to vomit.

The big secret is to spend a couple of dollars for Muni and an hour of your time to visit AT&T Park's Giants Dugout store and buy your ballgame tickets at their office in the back of the store. You buy them at face value and pay nothing extra. If you are in the ballpark for a game and buy a future ticket at the advance ticket window, there's no surcharge, but may charge a one-time 50 cent fee; plus, go there if you want to upgrade to a better seat.

Say a ticket on the upper deck costs $20, AT&T Park's ticket office sells them for $20; but head online and pay a 17% surcharge and an extra fee for will call or print-at-home, or buy them at an official ticket outlet (any other Giants Dugout store) and pay the 17% surcharge.

I bought four tickets for the season for $159 at the ballpark's dugout store ticket office, but if I bought them all online or at a different ticket outlet, I would spend an EXTRA $27.03. 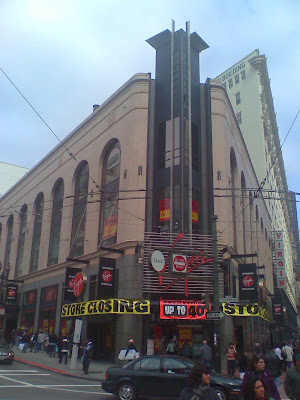 One place to stay away from is the Virgin Megastore. While they claim that "everything is up to 40% off" it's really just a laughing joke. I was there yesterday and "40% off" was only on the magazines. DVDs were only 25% off, and any accessories such as iPod speakers was a measly 15%. But you need to read the price tags very carefully. They had new copies of the film "Milk" on their shelves and the sticker price was $25.99, but even with the discount price, you might as well spend your money at Costco where you can get it slightly cheaper.
Posted by Akit