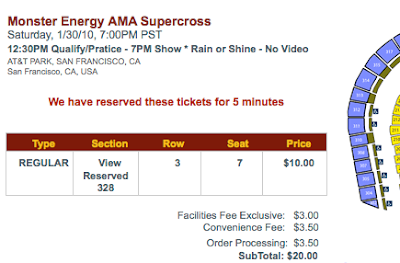 Have you ever seen such a rip-off on event tickets?

AT&T Park is hosting the Supercross event where motorcyclists race against each other on a huge dirt track for one night only.

Take a look at the photo and you'll see that when you add all the service fees, you are paying 100% more (double) the cost of the face value of the ticket. THAT TOTALLY SUCKS.

Even crazier is that the UFL is coming to AT&T Park by hosting three football games for the new team known as the "California Redwoods." Since season tickets are not that expensive, I went down to the Giants Dugout Store at AT&T Park to purchase tickets, knowing well that by buying advance tickets at the event site, you DON'T PAY A SURCHARGE. I saved over $35 for this Giants baseball season and picked out the best seats in the house.

With that in mind, I spoke to one person who could not find it in the computer. A co-worker came by and said that non-Giants tickets are sold there, but a surcharge would also need to be paid. I refused to pay the fee because every person knows that it's surcharge free when purchased on-site.

I even tried the automated machine (which I was told was not working by the idiotic employee), and they only sold Giants tickets.

What's your thoughts? Should surcharges be levied on people who wants to see events?

Should there be a state law that regulates the maximum a service fee/surcharge can be levied? Some charge 17%, UFL tickets average 13%, while the Supercross event can charge up to 100%.
Posted by Akit