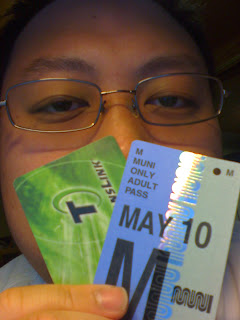 I decided that since TransLink on Muni was too unreliable and hearing horror stories on the comments of a recent posting titled: "TransLink's Reliability on Muni is Tanking," I've decided to skip on the electronic pass for the month of May (and likely beyond) in favor of a paper Muni pass.

Even though TransLink claims a buggy software update a couple weekends ago was the main reason why a lot of the Muni vehicle readers had failures, and fare inspectors allegedly issuing citations to passengers who have a pass (when the vehicle's card readers are non-operational and there's no clear policy if passengers should pay with cash and get reimbursed); it made me make a very serious decision to switch to paper.

Another reason why I'm doing an about face is just some poor public relations from Muni about TL/Clipper. People at the SFMTA Board of Directors meetings talk about an easy way to save the agency money, but it always seems it's just "one ear and out the other." I've also asked Muni about a time schedule on the fare gate installation so people can see how the new gates work out and maybe get a chance to be the first ones to try it out, but no answer from them. Also, 311 has been inconsistent on their responses to TransLink reader issues: I e-mailed 311 a problem and it was addressed by a SFMTA official in a reply message, however weeks later, I reported a similar issue on another vehicle to 311 and they told me to call TL instead.

I may be a person who likes the TransLink/Clipper program for it's potential to save transit agencies money and make it easier for passengers to pay for their rides, yet, who would use a product when the card reading equipment still has problems (especially on Muni)?

So here's the game plan for now: I'll still use my TransLink "M" pass for the next couple of days because the new month is approaching soon, but the paper pass will be my new mode of riding Muni. The TL card will still be used for other transit agencies where reliability is much better, including BART and Golden Gate Ferry.

On a side note, did any of you registered TL cardholders get a letter in the mail recently about the Clipper transition? It was so brief and such a waste of paper. They could have saved money just sending e-mails or postcards.
Posted by Akit

I actually just sent an email to Translink about the waste of paper and postage on that letter before cruising over here to your fine blog.

Also, I complained about their incorrect grammar talking about Clipper Ship(s). For all those millions on marketing, they should get a little proofreading.

Yeah I got the letter. I have not noticed any malfunctioning readers this week.

Last night I was on the 38L outbound, when the proof of payment guys boarded the bus at Van Ness. They didn't even scan my Translink card. Maybe they've been told to disregard those with cards for now?

Yeah I got the letter too, it did seem wasteful. I wish they had used that money to mail replacement cards, I really like the new design.

Yes, I was pretty shocked that they would send a letter about that. In fact, I can't recall if I've received any informational updates in the past (other than automated requests I'd made), but it boggles the mind why they'd send that full-color letter.

On another note, Translink seems very reliable on AC Transit, which I understand was one of the first agencies to make an official transition. In my experience, it has worked at least 98% percent of the time. The readers at least look to be the same as MUNI readers. I don't think there were too many problems transitioning AC paper passes to Translink. Now if UC and AC would team up to put Cal students' passes on Translink like they are for faculty and staff, that would be much better than the little sticker on ID cards, to deter both fraud and theft.