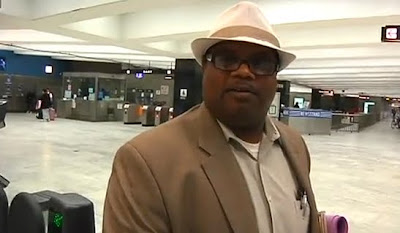 Misconduct in the workplace is not a good thing, especially when your boss wants to grill your ass. You'd be lining up at the unemployment office while the clerk tells you have been denied for gross incompetence.

In my previous posting, I mentioned about a KRON news report showing how people can evade the new Muni metro gates with the movement of their hand. Yeah yeah yeah, just a way to break the law. I won't get into that morals crap right now, just a little bit later. 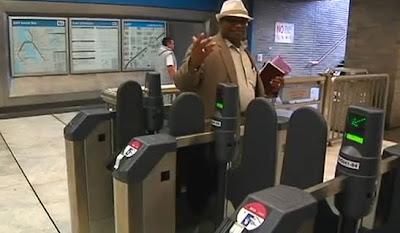 When watching the video, the person who really demonstrated in detail about how to break the law was a Muni employee, who is also a station agent union representative by the name of James O'Brien (photographed).

So if you think getting caught on camera won't get you punishment, think again... Let's all remember, cameras that catch crooks in the act do get a nice ticket in the mail or arrested by cops in the near future. Red light cameras gets a nice fat ticket in the mail, 38-Geary Muni buses have cameras that catches people parked in the bus lanes on Geary and O'Farrell, and even this news report of Alameda County parking cops at a BART station taking photographs of cars parked in a bus stop if they can't issue the ticket in time.

Time for some good old "morals, honor and respect" talk:

Just being a Muni employee does not exclude you from breaking the law. I've called the cops at times when Muni buses blatantly ran the red light at dangerous intersections just so they can get a head start.

As Stanley Roberts of KRON 4 says: Mr. O'Brien demonstrated his law breaking talent and "who just happened to be present when the flaw was discovered." So basically, Mr. O'Brien did not get permission from the SFMTA to demonstrate this to the press (this is why there are PR departments who do this stuff), but he did anyway, and demonstrated to thousands of Bay Area residents on how to break the law.

My moral gut tells me, James O'Brien shouldn't have done that on video. By showing a Muni employee (also a union rep) demonstrating something illegal, in which others may follow is just plain wrong. Remember the saying, "monkey see, monkey do?" Yeah, well the king monkey (James O'Brien) just demonstrated to the chimps (the general public) how to break the law.

Let me get straight to the point: James O'Brien should get that $650 ticket, and have his ass face Nataniel Ford for firing. He ain't no whistle blower as he "happened to be present," there's a formal process to complain and receive legal protection status. As I stated before, there's a reason why Muni has a PR department, they handle talking to the press, not unauthorized people like James O'Brien.

There's some criticism that KRON should have not shown this report, as thousands of viewers will follow along and break the law. At the same time, exposing it to the mass media is a good thing as Muni's well... response time to issues is just outright slow. Kudos to KTVU's 10PM news for not demonstrating it on video, as they have a very high viewership and fare evasion will get even worse.

I think he'd probably be covered under whistle-blower laws -- a disgruntled, unauthorized employee demonstrating a wasteful practice to the media is not uncommon.

In any case, I don't see what the big deal about this particular way of screwing the fare-paying taxpayer is. If you do this and the fare inspectors stop you later on your trip, and you haven't swiped your Clipper card, you're still going to get cited. And if you just plain wanted to risk it and jump the fare gates, you can still use the emergency exit like everyone else.

I didn't know you were an attorney, but I thought SFMTA employees could enter any station/board any Muni vehicle by flashing their red, MTA employee badge.

As for it being unethical (teaching others how to evade the law) and boneheaded from a PR point of view, I think you are right.

Ah, come on, Akit! I would think you'd call him a hero for revealing a flaw in a manner that forces Muni to deal with it quickly. If he had gone through channels within Muni and not talked to the media, it would have taken years to fix. (I know - I'm a gripman at Cable Car Division). By going public, he wasn't telling people how to beat the system (and we still have fare inspectors, and people can still board the Metro without barriers on the streets), he was making the design flaw public so somebody would actually do something about it.