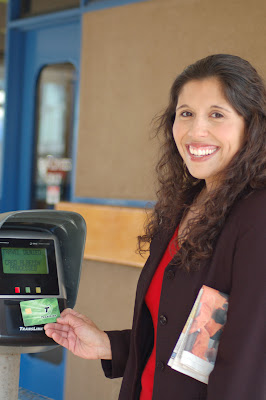 For all you people who don't know, Translink is the program for the San Francisco Bay Area transit systems to provide one card for all transit systems. Think of it like your Visa card, it is accepted nearly everywhere and recognized by practically everyone. Translink does the same thing in the form of electronic cash, but improves it with the purchase of passes, automatic bus transfers, and other special features. Actually, if it worked perfectly, you can have multiple passes on your card. Plus, you never have to swipe the card, you simply wave the card near the sensor, or can be stuffed in a wallet or purse and you have to just get the card near it.

Just to note, the photo on the left is a little strange... The MTC (Metropolitan Transportation Commission) has this photo available for public use, and the lady tagging/scanning the card has the red light lit and it says that the ride is denied. How embarrassing to the lady, smiling while your ride got denied. Click on the photo to zoom in.

But then we realize just how much of a hassle it is to get this program running. It is a welcoming sight that people who ride AC Transit and Golden Gate Transit & Ferry services can use this amazing card to get around to where they need to go. Plus a nice incentive is that AC transit users received a small discount per ride or a $10 discount for a 31 day pass.

Golden Gate Transit & Ferry services give patrons an automatic discount, treating any person like they purchased a discounted ticket book. Take a look at this grid from the Golden Gate Ferry website:


OK, two agencies are working well. Haven't heard that many complaints in the news from these two agencies within the past year.

But how about the other agencies?

San Francisco Muni: Insiders are claiming that Muni should be ready to run with Translink (except Cable Cars) by July 15, 2008 after a few delays that got the attention of the Chronicle newspaper. Unfortunately, the people at Translink and the SFMTA (the authority controlling Muni) does not mention an official release date for the program. I've already e-mailed SFMTA and Translink last week and I still have not received a reply back from them. The SFMTA website mentions that Translink is still under "testing," and does not officially condone passengers to use the new program. They claim that it is not out for the public to use yet, but warns you that if you attempt to use it, to simply be prepared to have cash ready in case it does not work.

How about, if the reader works and accepts my electronic money, I should be offered a bus transfer if the reader is not working on the next vehicle I have to transfer to? There is no official message that a transfer will or will not be issued. It kinda leaves it out of the open, aye?

I'm also fortunate that I am a Commuter Check participant, and I now have the option to have my commuter checks be automatically uploaded into the Translink program. But without official notice from Muni about using the card, I don't even want to risk it. I'll stick to my token ticket book thank you very much.

BART (Bay Area Rapid Transit): They claim that they don't like the idea of Translink. Maybe it is because the company that installed those new ticket gates don't like the Motorola ERG technology? In fact... Cubic, the gate manufacturers, have their own card technology and is in strong use in the Washington DC area. Even more odd is that instead of letting Translink do a test run on the new equipment, they decided to go the opposite way by creating their own RFID card program using Cubic's technology.

In the future, we may have to carry two cards; although BART officials claim that they want to get on board the Translink wagon as well.

As for the other agencies, no word on what progress is happening.

Here is some interesting things with Translink:
My credentials: My goals for Translink:
Comments are welcome!
Post at: http://www.akit.org/2008/06/whats-wrong-with-translink-san.html
Posted by Akit

I have consistently been in touch with the Marketing Director at Muni for TransLink due to a complaint I had when I used the system (eventhough it's still being "tested"). I have been helping her put together a list of TL testers, so I am assuming that it's supposed to start soon. She won't give me a direct answer either. Maybe with two heads, we can get somewhere!

I appreciate your comment. I remember seeing this similar posting on the BARTrage forums.

I called Translink after they did not reply back to my e-mail and they claim that Caltrain and Muni will be running by the end of summer.

I signed up for the BART EZRider smart card that you mentioned. So far, I really like it. I've had 3 autoloads ($135) charged so far. I did have a weird problem exiting one night last week but otherwise, it is fast and easy to use.

Why can't TransLink be like that? I don't know enough about the technology to understand the difference.

EZRider's technology is 100% compatible with BART's gates because it is made by the same company: Cubic.

Translink works on ERG/Motorola's technology and is a competing company who won the contract to build the Translink system. The bad news is that Translink's technology is foreign to the Cubic programmed gates and BART and Cubic were resisting the project.

I use Translink for GG Transit and have an EZ Rider Card. I would really welcome not having to fish for MUNI money - and especially not trying to use the change machines at Castro MUNI.

But I cannot figure out how exactly Translink will work on Caltrain. Are the conductors going to have to carry a scanner?

During the trial run, the conductor carried a small pocket sized card reader.

Eventually, they just stored one of those readers in each trainset since it was less used.

sure, but how do you know everyone has paid? Scan everyone's ticket? Too time consuming...

As of 3 July 2008, MTC says "[TransLink] is expected to achieve revenue ready status for operation on Caltrain and Muni this summer."

I guess the July 15 date wasn't the launch date - I am very disappointed. TransLink did, however redesign their website and still says that Muni and Caltrain will be up this summer. I strongly doubt it...

I work with MTC on TransLink and saw your Talk post on Yelp. Muni and Caltrain should be ready relatively soon (I am not going to give out the (un)official revenue-ready date).

1) Muni is a flat-fare system and all buses, card readers on poles (at all the stations) and card readers on the faregates should deduct $1.50 when you tag on. You then have a live transfer on Muni valid for the next 90 minutes. Payment enforcement officers should carry a handheld card reader that will allow them to check if each card is valid for travel. Of course, since it is still in testing phase, I doubt officers walk around with the card readers now, and I have heard anecdotal stories that if you flash them the card, they just wave you through.

You can also purchase a Muni fast pass on the Translink card and have it renew every month if you setup an autoload on the translink website with a conneciton to a credit card, which takes away the hassle of having to purchase it every month.

2) Caltrain should employ a tag-on tag-off system at each of their stations (similar to the current Golden Gate Transit method). You will also be able to buy monthly, ten-ride, and other caltrain products depending on which origin and destination zone you prefer.

Thanks for the update MTC person!

That's interesting about SFSU and a "Class pass." When the progs were running around saying "give discount passes to 18-21 year olds" I counted by suggesting all the colleges buy muni passes in bulk, get a discount, and pass them on to the students.

When I attended UCSC my student ID was also a bus pass, which was really important, given how remote the school was and if you didn't have a car, you HAD to have a bus pass or a bike to get off campus!

Hey guys, thanks for all the updates. Any word on the latest development for the Muni and Caltrain? It's almost the end of the "summer" and all the Caltrain machines still say Out of Service. They were showing Testing in Progress a while back and I got all excited, but alas, now they're back to Out of Service.

WARNING: Despite Caltrain's translink units showing "testing in progress" and giving "OK to ride" when you tag against them, I was thrown off a train this week for paying using Translink and forced to buy a second ticket; the translink purchase was in fact charged to my account, so it was a real catch-22.

any word on when this is supposed to go live?? I just got translink because i saw the meters at caltrain and now I can't use it. How can I get on the pilot program?

Unfortunately, you should not use the Translink program unless if you are a volunteer trial participant for Caltrain or when the program is in full swing.

You don't want to put yourself at risk of getting a ticked-off conductor and cop giving you a ticket for fare evasion. If you are at least backed by Caltrain to test out the program, you at least have some legal protection/defense when confronted.