Lindsay Lohan - Needs some jail time for DUI and Drugs 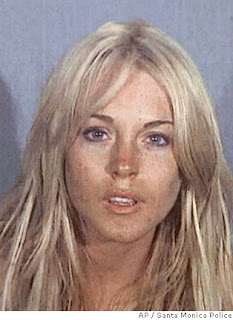 Just posted on the news this morning, Lindsay Lohan is arrested for driving under the influence of alcohol (misdemeanor DUI), driving with a suspended license, and possession of cocaine (felony) and transport of a narcotic (felony).

Plus, just to add insult to our morning coffee and cereal, she was just released recently from a rehab center after being in a six week detox program. She had to wear a tamper-proof ankle bracelet that constantly monitors her blood alcohol levels for alcohol, but it seems that device that is supposed to keep her sober, made her get buzzed and possibly "high" again. Now she's arrested with a blood alcohol level of .12 to .13 percent (legal limit is .08 percent).

Does it seem that Lindsay Lohan is becoming the next "Paris Hilton" to be sent to a jail for some real life treatment? But wait, there's more! If she gets convicted of a felony for the drugs, she would not go to a county jail (where she'd get the "special" treatment), she'd go to the overcrowded, awful, and orange jumpsuit world of the state prison system! You know, the place where Governor Arnold doesn't give an honest crap about you and you just have to eat stale hot dog buns with some mystery meat product on the side.

My suggestion, lets get her into a "scared straight" program where we send Lindsay to an infamous female or even a male prison. There, a trustee of the prison will give the ultimate tour of the facility, including giving a scary lecture about life behind bars, a tour of prison cells (which I don't think they are "model" rooms) and a good lecture about why you should not drop the soap in the damn shower.

Or how about we shove her into the Maury Povich show (not to do the paternity test) and bring in some ex-military sarges to bust her butt with good old-fashioned push-ups and scream at her until she cries; waaah waah wah!

Here's my point of view about this, how in the hell did this goody goody girl turn into a piece of turd? Did she get "the talk" by her parents and by her teachers about people who abuse alcohol and drugs? Remember the classic South Park "drugs are bad" episode when Mr. Mackey said "drugs are bad... m'kay?" I wonder what her private school taught this little stupid lady?

Lastly, whenever she does get her driving privileges back, I hope that the judge orders that all her vehicles has to be installed with a breathalyser to start the engine.

Let's summarize my rants:
Drugs are bad.
Alcohol is bad (especially for her!).
Driving with a suspended license? Can we create a lifetime ban?
Let her wear a sandwich board that says "this is my second DUI and I had drugs in possession, and I was and still am stupid" and she should stand at a very busy intersection from 9AM to 5PM for an entire week, including weekends.
Have a nice time in prison! Watch out for the shivs!
Posted by Akit