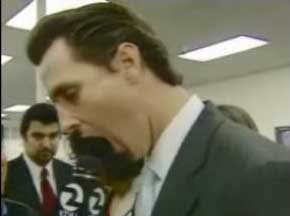 Sometimes you have to wonder about what is going on with our city's weirdo politics, especially when it comes to the local government and our wacko state representatives.

Let's talk about our city politics:

-- Mayor Gavin Newsom:
The guy sure loves hair gel. I wonder, does he get that stuff at the Costco, or does he have to get the super goopy stuff down at the local Walgreens? Ever seen him without the gel? He looks kinda odd without it.

Newsom is especially taking the heat from Muni's really fucked up "T" Third line that eliminated the classic 15 line and put in an unreliable Metro system that has a reputation for being slower than BART.

How about the sex scandal? Can anyone believe that Newsom was able to escape the scandal by claiming that he was an alcoholic and that he was to go to treatment? Come on, I've heard that many times by bigger celebrities like Lindsay Lohan and Mel Gibson. I like to call Newsom's alcoholic defense "The Mel Gibson defense."

Also, did anyone see the "chicken" clip? Here's a look:

-- Supervisor Ed Jew:
Ed is becoming San Francisco's slappin' boy after being accused of taking $40,000 as an incentive (I call it a bribe) to get through the permit process for a couple of tapioca drink stores known as "Quickly." Later, the Chronicle finds out from his neighbors that they have never seen Ed go to his registered home in the Sunset District.

For the weeks after that, all the local news outlets were beating the crap out of him. The only news outlet that is trying to call out "racism" is AsianWeek. I read AsianWeek, but I don't like their view and opinions about their call-out that targeting Ed Jew for taking bribes and not living in San Francisco is simply racism. The guy really fucked-up, and especially the residency problem. Why be elected to a high profile job when your residency might be in question?

But still, the funniest thing about this Ed Jew problem: He surrendered to cops in Burlingame after DA Harris decided to put a warrant out!

-- Supervisor Chris Daly
The Mayor takes illegal drugs? Cool! I actually did a chant at the end of the Giants/Yankees game in the stairwell at AT&T park by yelling out "Newsom's crackpipe!"

-- Recall Chris Daly, Aaron Peskin, and Jake McGoldrick
To those who are running these recall petitions to get on the ballot: Get a damn life.

When I was shopping at my local Safeway store about a few blocks away, I was approached by this guy that was asking me if I lived in the Richmond district and if I would sign a petition to recall Supervisor Jack McGoldrick. I told that guy, get a [fuckin'] life.

-- State Representative Carole Midgen:
Tell us when you drive your car, because I don't want to be on the freeway during those times!

Taking drugs and driving: Dangerous combination. Remember to read the bottle before driving.