Need to vent Outside Lands anger? Do it HERE 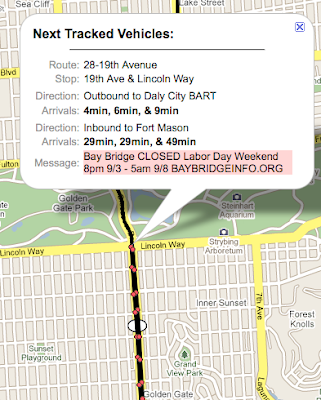 Strangely... there's not many forums out there right now that are letting people comment like crazy about Outside Lands and the impact on communities. Last year, SFGate, SFist, Curbed SF, and my blog were the primary places for disgruntled people to complain.

This year, a lot of people are noting their experiences on Twitter with the hashtag "#outsidelands," some noise complaints, and Muni problems.

Just a few minutes ago, SF Appeal posted their own Friday recap. Kudos to them for posting it up faster!

Update: Want to read over 30 disgruntled comments? See SFGate's little hidden comments page about the event here. A lot of people are not happy with the sound, now with accusations that the sound management folks jacked-up the bass.

Here's some of what I've noticed on Friday:

As always, I have my helpful survival guide to Outside Lands available to you with helpful phone numbers if things start to become a problem.


Here's some additional info I'm also going to update the survival guide with:

Your rights as a San Francisco citizen during Outside Lands:
(Screenshot taken at 6:25PM)

The noise on Friday night was so loud, even with the windows closed on a hot night, that I called the Outside Lands number. The first time, I got a recording that their inbox was full. The second try, I talked to a lovely young woman named Rachel, who told me that there were a lot of complaints from my neighborhood (La Playa at Judah), but nothing could be done until the concert ended. It actually ended 1/2 hour earlier than scheduled, thank heaven. This morning, they were apparently testing the sound system, and so far, as of 4:30, there's no shaking bass.
The traffic on Great Highway has been jammed almost all day.
I will complain to my supervisor; this is not an appropriate use of park land or city resources.

Hi Akit, here's a follow-up item for you. 311 gave me the Outside Lands help-line number; I called it, made my comment, and because they asked, I gave my phone number, but said I didn't want it given out. Now, every day, "Target Point Consulting" is calling my number. Coincidence? I really doubt it. Look up that company. I do not want to be on their call list. I could be wrong, but if I got on their list because I called the Outside Lands number, anything positive I had to say about their ameliorative efforts this year are totally cancelled out.

It seems to me that there are enough legitimate complaints about Outside Lands that we can and should organize parkside residents.

One idea I had is to require the concert organizers to place sound monitoring equipment in a 2-mile radius around the park and adjust volume levels NOT in response to complaints, but in response to measurements.

If we can't get action on that front, might an environmental impact review or something similar be one way to limit the stress caused to residents by forcible noise pollution?

The 2011 OLs sound was WAYWAYWAY louder then ever. I should know, I was in front of each of the stages over the 3 days. What did I see? Each stage (except LandsEnd) sported HUGE very low end subwoofers each the size of a SmartCar! Each stage had at least four and the sound level was loud enough to seriously damage the ears. Many of the fans reacted but it seems the bands and the staff did not care. FIRE THE SOUND GUY!