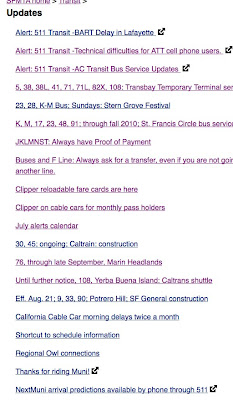 The SF Marathon is tomorrow and it will cause a world of hell for everyone in the city, especially those who have to drive through Golden Gate Park, cross the Golden Gate Bridge, and get in and out of the Inner and Outer Richmond via 26th/27th Avenues.

With all these marathon routes, you'd expect Muni to be up to date with the latest information about any re-routes or changes because it does affect a lot of people who are trying to get around the city. The answer is NO.

I've got proof, the photo I've attached is the "updates" page of the SFMTA's transit section and was taken at 9:10AM on Saturday, July 24, 2010. There is NOTHING specific on how the marathon course will affect transit lines.

I even gave 311 a call to get information. The operator admitted he could not find anything on the SFMTA website, and he looked through his other resources. He told me one of the lines I'm interested in more information will be "going around the [Golden Gate] park." I asked for his source of information and he said he was reading it off a flier given to the drivers. I also asked him if I can get that information in writing and the answer was a big fat NO.

What the hell is wrong with this city government? As a citizen, I have the right to know what is going on and how it affects my movement around the city. The SFMTA should have posted the re-route information at least a week in advance prior to tomorrow's event, but they FAILED.

The reason why I'm arguing this is because I am meeting a co-worker tomorrow at the Academy of Sciences on Sunday, and I will have to take the 44 line in order to get there. Since the marathon goes through Golden Gate Park, I'm worried I won't make it there in time as Sunday service on Muni is far less frequent than weekdays.
Posted by Akit